Skip to content
The writing on the wall: Cataract surgery reveals surprise for mom in Zambian home
May 5, 2022 Caroline Wagner Zambia 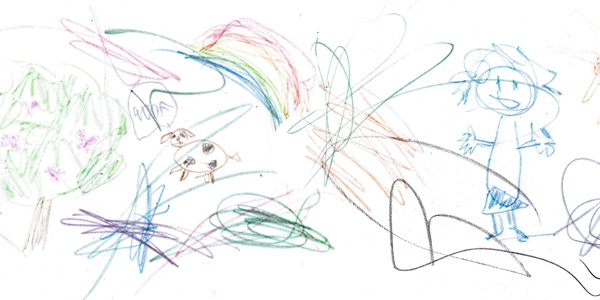 It was a moment of great joy. After seven years of blindness, Maureen could finally see again. She had just undergone cataract surgery, and when she got home from the hospital, she was over the moon to set eyes on her five children, relieved and happy that she could see their precious faces once again.

Then she stepped inside her house and got the shock of a lifetime.

The walls of her home were covered top to bottom with crayon drawings! It seems her youngest children had become quite the little artists, leaving a rainbow of colours throughout the entire house. And while it was certainly a gift to be able to see her kids’ masterpieces, a messy home just wouldn’t do.

So, Maureen did what many tireless and dedicated moms would do in this situation… She got out a bucket and rag, and started cleaning.

It’s no wonder Maureen didn’t realize her kids had become such prolific muralists. Her husband died in 2015, leaving her to raise their children on her own.

At the time, all five kids were under the age of 10 . Shortly afterward, Maureen lost her sight entirely. Her life became a daily struggle, and she had to rely on the oldest children to help her get around and manage the household.

She considered getting medical help, but her relatives discouraged her, telling her she would lose her eyes entirely if she did.

This past January, two Operation Eyesight community health workers showed up at Maureen’s doorstep in Matero, Zambia during a community screening. They identified her as having mature cataracts in both eyes, and within a week she was transported to the nearby University Teaching Hospital’s eye unit for surgery. The operation was successful, and after spending a night in hospital, Maureen went home, sight restored.

When Operation Eyesight employees called on Maureen six weeks later to check in, you can guess what she was up to – still cleaning.

“I am so happy that I got my vision back!” she told them, “I no longer struggle to take care of and cook for my children.”