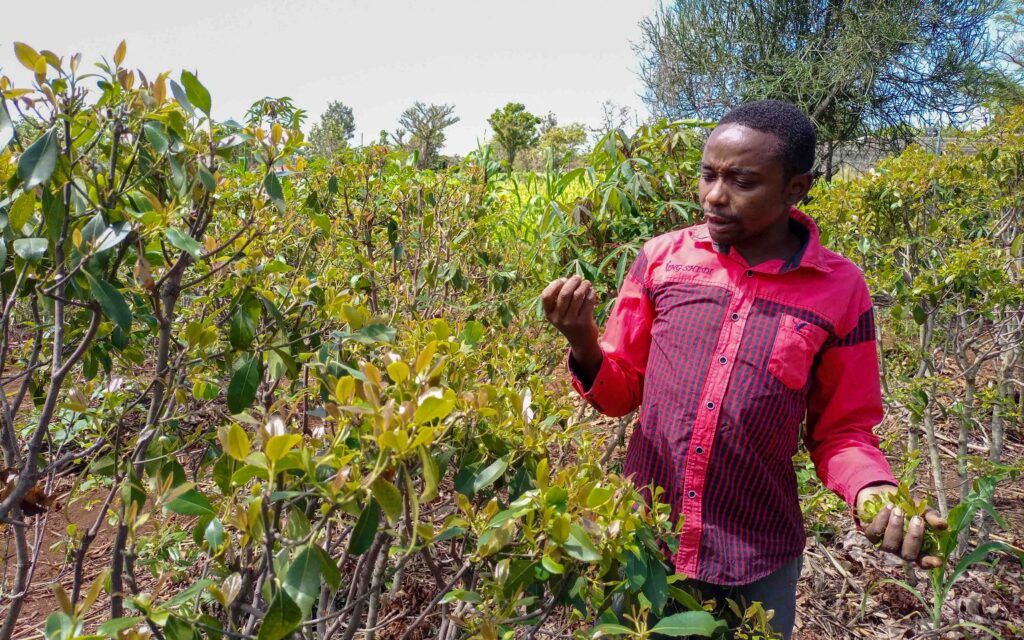 Today, 36-year-old Benson keeps himself busy by managing his flourishing corn and cassava crops. But that wasn’t always the case.

Benson lives in a village northeast of Nairobi, in an arid part of Kenya’s Embu County. In 2015, his vision began to fade. Neither he nor anyone in his family knew what caused the vision loss, and as it worsened, his frustration mounted. He started to distance himself from his family, and he tried punishing his own eyes for their failure to see clearly.

“I decided to never open my eyes and I would beat them for not seeing,” he said, recalling how confused he was at the time.

No longer able to farm and feeling isolated from others, Benson turned to alcohol and street drugs to fill his time. He spiralled into depression, and his family noticed his behaviour was becoming more and more unpredictable.

Things came to a head when Benson became violent, breaking the windows of his mother’s home with a walking stick. Concerned for his wellbeing, Benson’s family intervened by taking him to a rehabilitation centre, hopeful that with the right support, he might overcome his addictions.

While in rehabilitation, a doctor visiting the centre took a look at Benson’s eyes and diagnosed him with bilateral cataracts.  A manager, having heard of a new eye clinic at a local hospital, took Benson into the city for further care.

At the eye unit at Kerugoya County Referral Hospital, Benson’s diagnosis was confirmed, and he was booked in for cataract surgery. The eye unit was made possible by a collaboration between the hospital and Operation Eyesight, with our organization providing the medical equipment and training for the ophthalmic workers. Before the eye unit was established, people like Benson had to travel more than two hours to Nairobi to get eye health services – a huge barrier for people who don’t own a vehicle.

When the bandages came off, Benson couldn’t believe the difference the surgery had made. He asked for a mirror, then jumped up and down with excitement when he saw his own face grinning back at him. After years of living in darkness, he could once again see.

When he went back to the rehabilitation centre, the other patients could hardly believe it when he said he had regained his vision in just a few short days.

His father, after hearing the news, had his own eyes checked and was also diagnosed with cataracts. Like Benson, he received cataract surgery free of charge, and regained his sight.

After Benson left the rehabilitation centre, he decided to take up farming. He’s grateful that he no longer has to rely on his family financially. Now in recovery, with his depression being managed, Benson’s ambitions are growing. He hopes to buy more land soon, so he can continue to flourish and become more independent.

With files from Patrick Wainaina, IT Officer, Kenya