Trachoma is a painful and devastating bacterial eye infection, affecting more than 30 percent of the population across Kenya’s arid and semi-arid areas. Left untreated, it leads to irreversible blindness. 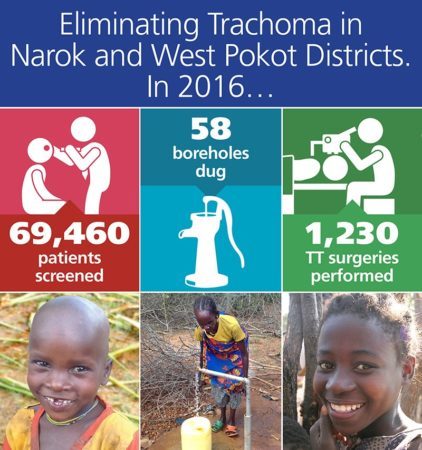 Operation Eyesight began the fight against this blinding disease with the Narok District Trachoma Project in 2007. The success of this project led to the West Pokot District Trachoma Project in 2014. The first step in both projects was to implement and coordinate the World Health Organization-endorsed SAFE strategy (Surgery, Antibiotics, Face washing, Environment improvement).

Using the SAFE strategy as a model, we started working with the Kenyan government to look for clean protected water sources. Lack of adequate clean water supplies leads to unsafe sanitary practices. When people don’t have enough water to drink, they’re not able to use any for hand- or face-washing, allowing bacteria and dirt to get into the eyes. This leads to the infection that causes blinding trachoma.

Operation Eyesight drilled its first borehole in 2007 in the village of Ongata Naado, Narok County, and since that time, 58 water points have been developed. This includes boreholes and water catchment systems, in both districts.

The effects of both projects are far-reaching, and access to clean, safe water creates positive impacts on communities in many ways. Facial cleanliness and improved personal hygiene, along with improved access to and use of household latrines have increased safe sanitation habits. These improvements, in turn, reduce the bacteria that leads to trachoma.

This is encouraging since Africa has the highest rate of trachoma in the world. But the good news is, this disease is preventable and curable, and for patients like Melua, this was a welcome relief.

Trachoma caused terrible suffering for this young mother of four. Identified through our community health workers’ door-to-door screening program, Melua received sight-preservation trachoma surgery on both eyes, and today has a new lease on life! Thanks to many wonderful donors, she’s resumed her household duties and caring for her young family.

In many African cultures, women and girls are designated to fetch water for their families. Just by improving access to clean, safe drinking water, our water wells have helped girls and women like Melua reduce their workload. Our trachoma projects have helped increase school enrollment, especially for girls, and improve teacher retention around the areas where boreholes have been developed.

Not only do these project help eliminate trachoma, they help communities thrive! Communities feel a sense of ownership for the well infrastructures and are responsible for training pump minders to maintain them. Having access to water means that not only does the community’s health improve, so does livestock health and even gardens.

Our country manager Alice Mwangi has been part of the Narok project since 2011. “We are winning the battle against trachoma! Through years of work, we are now seeing a positive impact. After implementing a door-to-door screening program to identify people with operable trachoma, we are finding far fewer people infected with late stage trachoma trichiasis these days. Coupled with a mass drug administration to treat cases of trachoma with antibiotics, the Narok Trachoma Project is proof trachoma is being eliminated.”

West Pokot District is seeing the same proof that trachoma is being eliminated, and Operation Eyesight is proud to work with The Queen Elizabeth Diamond Jubilee Trust Fund on both projects. We are extremely grateful for their support for this important project. It is our goal to declare both districts free of trachoma by the end of 2019.

Together with our partners and generous donors like you, we can eliminate trachoma in Kenya! 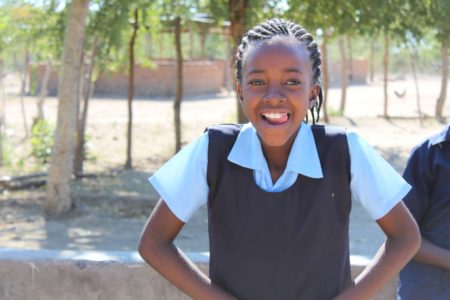 Blessings is a twelve-year-old girl from Zambia. She attends Mweela School in the Sinazongwe district. This school... 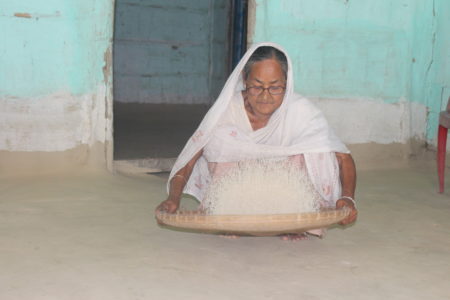 How the Gift of Sight changes lives

Kuluki is a widowed mother and grandmother who lives in Laholiya, a small village in India. Throughout...