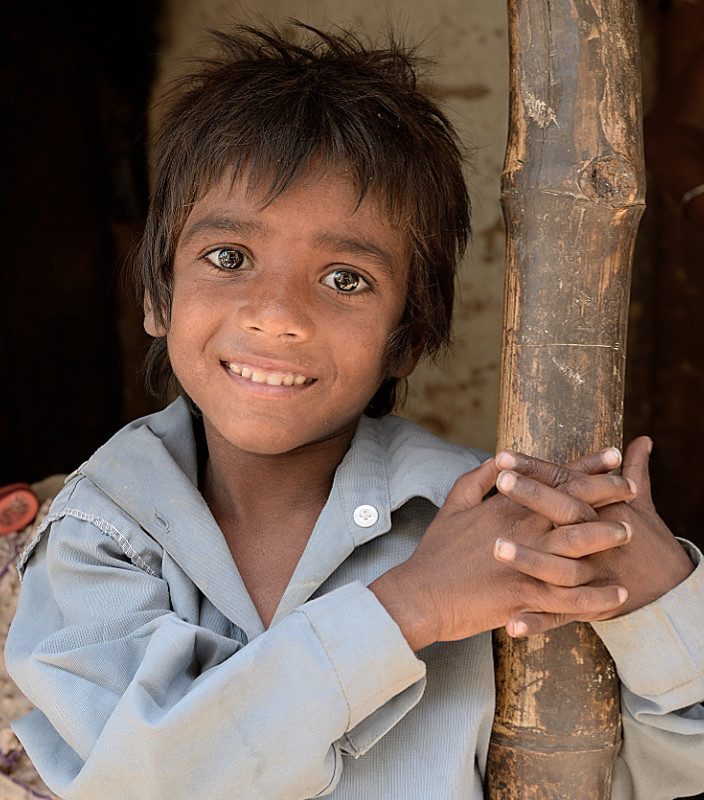 Today we’re excited to feature a guest blog post by Dr. Shivam Maini. In his post, he talks about his trip with our team to screen a community in India for eye health issues. While he was there, he snapped some great photos as well!

Dusty and hot winds sweeping dry farms. How interesting can they be for photography? This was the first thought that had crossed my mind when I was told of a short visit to a neglected village in summers. Here is an account of my trip to that village.

Operation Eyesight Universal is a Canadian NGO working in the field of restoring eye-sight. Recently I got an opportunity to visit one of their projects being implemented in a village in India. I got a first hand view of what the organization does at the grass root levels and also got a chance to indulge in photography. Here is a small account of my visit to the village and interaction with the people there.

I had long been planning to visit some far out village and capture the lives of the people living there in my camera. In a village in deep interiors of Uttar Pradesh, a state in India, Operation Eyesight Universal has been implementing a project of theirs which screens people for eye health related problems by going to their door steps and gets all those who require treatment, treated. The senior team members of this organization keep visiting this village and many more like this, from time to time and it was on one such visit to the above village that I got a chance to see their work. I grabbed this golden opportunity.

We embarked on the short trip from a peripheral eye check up center that is called as ‘vision center’. Apart from me there were a couple of persons from the local eye hospital that was working in partnership with the NGO and there was a senior member from the NGO itself. It was a hot summer day. In northern parts of India, summers are dry and really really hot. The car’s air-conditioner was not working well which was in a way good. On our trip we were getting acclimatized to the harsh weather waiting for us. The driver took a turn from the road to something that looked like a wide jungle trail, with baren land and dust covered bushes on both the sides. There was no road. The soil was parched and as we moved along, we left clouds of dust behind us. Some of it kept creeping inside the car too. Thankfully my photography gear was safely packed in my camera bag. After few kilometers of traveling, we reached a place which looked like a settlement of people with dried farms all around. The dust behind us had also started settling down. It was time to take out my camera and walk down to the village.

I put on my cap, took out my camera and was ready to go. The lens mounted on it was a Nikkor 50mm f/1.8 G. When I do not know what to expect, this is the lens that I fall back to. Apart from this, I also had a wideangle prime and a short telephoto prime lens in my bag. Took off the lens-cap which as a matter of habit went into the rear pocket of my jeans and mounted the hood. It had been just a few minutes after stepping out of the car and I was already feeling the heat. While I hunted for a water bottle in the car, I could see the eye care team getting ready with their work. They were planning the visit to the village along with a lady from the village itself. This lady had been picked out from the community and trained as a health worker. She knows the village well and will be acting our guide on this visit. Another community health worker who was already busy with her work in the village also joined us.

The team started walking towards the huts at the beginning of the village. The health worker went about her regular work. In a matter of seconds, she was now being treated as a special guest by one of the families there. She went on to explain about how she was going to perform a basic eye checkup. I got a chance to click some candid photographs of the interaction and the village folk getting their eyes examined. It was a sunny day. Even with small apertures and low ISO, I was getting decent shutter speeds. No worries about inadvert camera shake. Under the thatched roofs, it was dark and I had to use open apertures and slow shutter speeds. I prefer doing so as long as camera shake does not become a problem. Even with the excellent high ISO performance of today’s cameras, I still find comfort and reassurance when I use low ISOs. Maybe a left-over habit from the film days.

Anthropology sometimes finds its way into photography but here in this far off village I was once again face to face with this. The way the people lived in the village and what actually made them humans was clear. I came to know about a person who had undergone a sight-saving surgery some months back and had now become an example for many others suffering with similar sight problems. His beaming smile while he touted his glasses told a story about his confidence and happiness on regaining his sight. There were many more such untold stories waiting to be told in this village.

A few more yards ahead, there was another family. Health worker went about with her work of examining them and I went on capturing these wonderful moments. The villagers were also intrigued by a person with a camera amongst them. The biggest advantage with digital cameras is their preview screen. I was able to immediately show the photographs to the inquisitive children there and they were more than happy to let me photograph them. Their parents too were pleased that their children had caught my camera’s attention. They liked my photographs and I deeply appreciated their consent and the welcoming smiles on their faces.

The children did not have any toys to play with and yet they were happy. Far from the consumerism that is eroding our minds and the minds of our children, these people were contended with whatever little they had. Interestingly on my way to the village I was thinking of a Leica rangefinder. How nice it would have been to own one and how easily I could fit myself into the role of a street photographer. Here after visiting the village my perception was changed. I had a camera and lenses to go with it. They were quite capable of capturing the photographs that I wanted. I felt awkward that with these in my bag, I was longing for more on the way here and on the other hand were these people who did not have even the bare necessities and yet they had smiles on their faces which are seldom seen in cities now a days.

The villagers were very welcoming. They offered us some food and drink from their own homes and even provided us chairs to sit. In these huts, the occupants have very limited facilities. Even the number of chairs are so less that not all can sit and when they offer these chairs, it is out of their love and affection for visitors that they do so. This is a sign of respect which they had given us.

For most of the photographs, I used autofocus using the central sensor and then recomposed my images. When the shutter release button is used for autofocus, the constant need to focus or delay in focusing is uncomfortable for me. To avoid constant refocusing, I prefer to focus lock using the rear AF-button or use manual focus. It helps me in quickly framing the photograph and capturing all those moments which will not get repeated.

The hot dry weather is not the best thing when it comes to photography. The air was filled with dust and every now and then it would settle down on my camera. Outside of the camera and lens can be cleaned easily. What worries me in these situations is the dust that may get into the camera and lens. Just two precautions work for me – minimizing the lens change and turning the focus and zoom rings slowly. I had two more lenses on this trip and I did not feel the need for changing the lenses. Yes, as most photographers do, I too ended up carrying more equipment than was required. The reason for this particular time and season for the visit was that during these harsh conditions most of the villagers are available in their homes and so it becomes easy to meet them and interact with them, and you thought social work was easy?

The work was almost finished at the village for the day. The team had visited some random houses. They had interacted with the villagers and seen the field worker do her routine work. I was thankful for this wonderful opportunity to see the work being done at the real grass-roots level and for the photography opportunity that I had got. The field worker picked up her pink bicycle and bid goodbye to us. It seems that she has become well known in the community as the lady on the pink bicycle who helps in restoring eye sight. My photo-trip would not have been complete without a picture of her. I grabbed a quick photograph of hers while she cycled away.

Thanks to Dr. Shivam Maini for submitting this incredible blog post. Visit his website for more great information and photos.