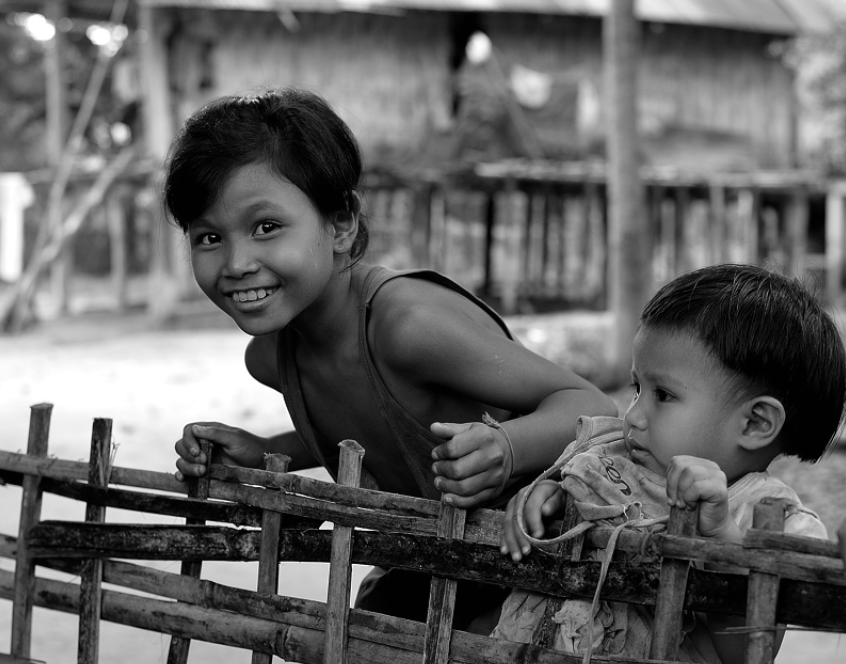 Last week, Dr. Shivam Maini, an avid photographer and photography mentor, went with our team to visit some of our projects in India. And one of his trips was to Majuli Island, the largest river island in the world. Operation Eyesight has been working to prevent blindness and restore sight in this remote area for over five years. Shivam wrote the following blog post on his own website, and we’re so excited to share it with you here now. Go to Shivam’s blog to read more about his work.

As chance would have it, I happened to witness a phenomenon that is changing the lives of people living on Majuli, the biggest river island in the world. Majuli is located in the state of Assam, surrounded by the mighty Brahamputra river. Famous for its masks and traditional dances, the island is a photographer’s paradise. I visited the island along with the team members of Operation Eyesight Universal and an eye hospital located in a nearby town.

I had planned on capturing some portraits, landscapes and whatever else caught my fancy. Unlike my usual limit of two lenses, I opted to carry along a Zeiss 25mm f/2 prime, a Nikkor 50mm f/1.8 G and a Nikkor 105mm f/2.8 Micro AI-S lens along with a Nikon Df camera body. That was three lenses in my camera bag! For once in a lifetime trip, I was not taking any chances. Apart from the above, I also had an iphone 5s which I used for some of landscapes.

We reached the river-bank early in the morning. The ferry was old and scary to look at and the river was an endless expanse of water, especially after the monsoons. Crossing rivers is not a comfortable thing to do for me, but then once we were in the ferry, I was mesmerized by the beauty of the water surrounding me. The distant Majuli island appeared very mysterious to me. What was it that Operation Eyesight Universal was so eager to see and show? Was the island as beautiful as people had been telling me? I had all my answers by the end of the day. The ferry ride took a little over half an hour to reach the island. We had traveled along the flow of the water. The doctor from the hospital told us that the return journey was going to take about two hours since we would be traveling opposite to the flow. It reminded me of the problems we had to solve in the school days. Were those by I E Irodov? I let the thought pass by. The water all around was keeping me occupied. There were beautiful photographs to be made.

The time passed very quickly in the ferry while I admired the abstracts surrounding me. On reaching the shore, I was taken aback by the contrast in the scenery. The island was pristine in its beauty but the people living there appeared very poor. The large shops from the mainland were replaced here by small make-shift shacks. Though poverty was visible all around, the people were welcoming and friendly. It may have been partially due to the very nature of these people or it may have been the impression created by the work that Operation Eyesight Universal and the eye hospital had been doing in the region, to eliminate avoidable blindness.

One of the fears that photographers face is the fear of mingling with people. (10 Fears that bind photographers down). I have found that a friendly smile crosses all barriers and helps capture the true nature of the people. Ability to approach people at close distances and photograph is something that many photographers lack. The physical distance between the subject and the photographer determines how well a viewer is able to look into a person’s life, going beyond the mere appearances.

Majuli island quite frequently gets flooded during rains. People here have adapted to this as a part and parcel of their life. The huts that they make are built on top of bamboo stilts. The height of the house keeps the occupants dry when the land gets flooded. It seems like a very difficult way of life. One of the team members from the group explained me that the reason these people have settled down here is because of the fertile soil. After each flooding, the silt that is left behind is very fertile and so they continue to live in these huts on stilts.

Majuli island is huge. There are many villages on the island. After traveling for over an hour, we reached one such village. With the efforts of the eye-hospital under the guidance of Operation Eyesight Universal, this village was now avoidable blindness free. Each and every individual who could be treated had been given the gift of sight. On reaching the village, the villagers greeted us in the traditional way, expressing their happiness by their dance. It was a beautiful celebration, especially since I knew the reason behind their happiness. I use my camera to photograph what I see. It is hard to image life without clear sight. Thousands of people on this island had been living in their own world of darkness in the absence of medical facilities.

There were few old ladies present who had undergone sight-saving surgeries. In a society where females are frequently left behind, I was pleased to see these old ladies who could now see well. Their expressions had a level of confidence generally lacking in such age group. Peering through their glasses, they were observing everything around them with interest.

As always, I was left impressed and deeply moved by the work that is being done to prevent blindness. Sometimes I feel like leaving everything that I do and working for the well-being of such people.

It was a very short trip but whatever time I got, I spent photographing various glimpses into the lives of the people. When visiting such villages, the ideal way is to spend time with them. Walking around in the villages and interacting with the villagers is the only way to capture truly captivating photographs.

On the way back, I tried capturing some more photographs of the villages, but the sun was getting ready to set and there was a large river to cross. We had to hurry back to the ferry. With a heavy heart, I left the island. Enriched with the experience of the life there, I got a feeling of contentment.

I am trying to become minimalist (Minimalism & Photography) but the Majuli island had people who already are minimalist due to the harsh living conditions.

Thanks to the support of people like you, we are able to continue our work in places like Majuli Island. There are still many people who are suffering from avoidable blindness, and they need your help. You can donate to give the Gift of Sight to those who need it most today — For All the World to See!