Skip to content
New beginnings with the Gift of Sight!
April 10, 2018 Emmanuel Ghana 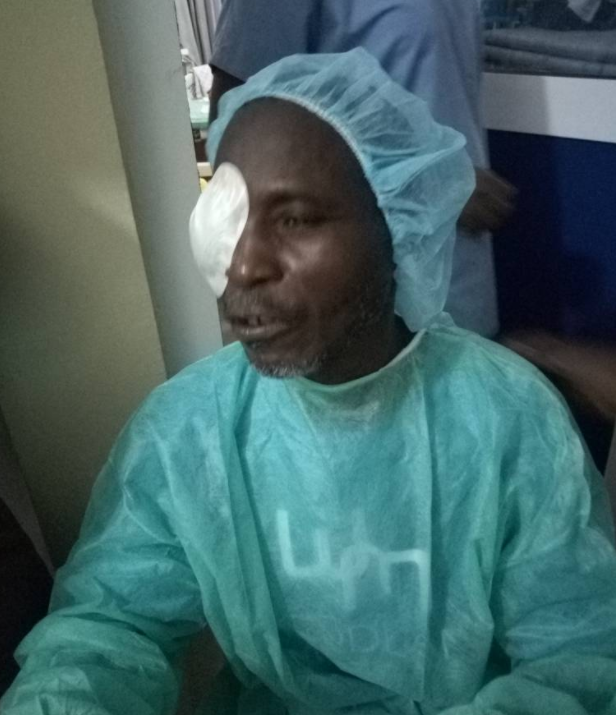 “I thought about ending my life. It was better than living in such misery, depending on my wife to take care of me,” said Kwaku, a 75-year-old man from a small town in Ghana.

Kwaku is speaking about his eye injury. A spark flew into his eye from a lit match while he was working with burning charcoal.

He lost his job because of that accident. Kwaku is the only income earner in his family. As the sole breadwinner, Kwaku’s job meant everything to him; he prided himself on supporting his wife and himself. “I felt like I had been robbed of my livelihood when I lost my sight. It was like everything in my life had come to an end.”

Kwaku’s vision worsened over the course of the next two years after his injury.

Without his sight or the ability to work, he lost his will to live.

Despite his condition, Kwaku was too afraid to seek treatment. It wasn’t until two years later when he started losing his sight in both eyes that he finally had his eyes screened. At that time, an ophthalmic nurse diagnosed him with bilateral cataract. The cataract in his right eye had been caused by his work injury two years prior and his left eye had started to develop cataract as well. The ophthalmic nurse immediately referred him for surgery at our partner hospital, the Ga South Municipal Hospital.

“I was afraid when I was told that I would need surgery… I thought the doctors would take my eyes out of my head to operate on them! But the ophthalmic nurse counselled me, explaining the process to remove my cataracts and I felt reassured,” said Kwaku.

His children were overjoyed when they heard the diagnosis!

“Our Father is the light of the family. He has made so much of a positive impact in our lives. Seeing him suffer became unbearable for everyone, it was a moment of total darkness that enveloped our family during his condition,” said Kwaku’s daughter.

Soon after his diagnosis, Kwaku travelled with some of his children to the hospital for his surgery.  After the surgery, Kwaku was thrilled to be able to look at his children’s faces again.

He couldn’t contain his joy after the bandages came off and he could see clearly for the first time in years!

“I can’t believe I can see again! I feel so blessed that I could be helped. Now that I know that there is hope for others like me, I promise to bring others who are also suffering from eye conditions to have their eyes screened. May God bless the entire team that helped me gain back my sight!”

Not only was Kwaku’s sight was restored, but he regained hope that he could again provide for his wife and himself..

“The light of our family is shining again,” said his children.

And you know the best part? It’s thanks to the support of generous people like you that our partner hospital had the capacity to treat Kwaku! Thanks to your kindness, his quality of life has improved. You can help more men like Kwaku by donating to our Eye Care Professionals training program – For a one time $100 gift, you could make an impact for a lifetime! Again, thank you for all that you do… For All The World To See!